From Scared and Abandoned to Safe and Loved!

From Scared and Abandoned to Safe and Loved! 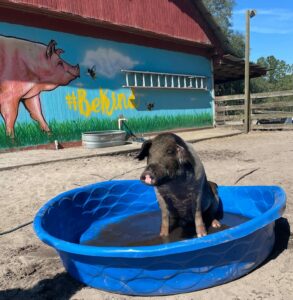 Have you heard the story of DUNCAN the pig? EPIC Outreach received the call from the Jacksonville Sheriffs Office on September 13, 2022 that they had two pigs impounded and one had an injury to his ear. What we later learned is that DUNCAN the pig was found in pain and anguish walking aimlessly on the street with his piggy pal DOLLY. Both pigs had been abandoned by their previous owner and were wandering around looking for food. They wandered into a yard and DUNCAN was severely attacked by the resident dogs.

Sweet DUNCAN had no defense against the strength and teeth of the dogs. Did you know that pigs are considered prey animals and a dog’s instinct, unless they are raised around other types of animals, is to bite? The dogs mauled his ear, snout, and entire face.

Poor DUNCAN had deep lacerations and chunks of his face missing. He was in bad shape. But luckily for him help arrived. Through a partnership with the Sherriff’s Office EPIC Outreach was able to meet them and evaluate both pigs. Upon further inspection it was clear that DUNCAN needed immediate medical attention and in that moment Jessie (Founder of EPIC Outreach) made an on the spot decision to take the pigs in and they immediately made their way to the sanctuary with EPIC Outreach.

DUNCAN received the necessary veterinary care which required three surgeries over two weeks. He proved to be a a survivor and made a full recovery!

We quickly learned that DUNCAN and DOLLY were both under a year old, super sweet, and just wanted to be loved despite being left on the street, defenseless, to fend for themselves.

DOLLY moved onto another sanctuary to live life with other pigs just like her, and DUNCAN continued to heal as he prepared to serve as an education ambassador to share messages of kindness and inspire others to be more compassionate.

EPIC Outreach gets calls for help with pigs in need weekly. The rescuing doesn’t end with the call. When an animal is taken into the sanctuary, that’s when the true rescuing begins. The animal gets evaluated for physical and emotional needs which all costs time and money. Often the animals need medical attention, routine veterinary care, food, bedding, and any other needs to allow them to begin to live a happy and healthy life. While the “caller” or person asking for help is doing a good deed, the afterwards is often forgotten and many of those rescued animals go on to live their full lives in sanctuary which requires constant care.

So while we all want to see the heartwarming ending of an animal going from scared and abandoned to safe and loved, don’t forget that their care is never ending and they need YOU to keep them constantly safe and forever loved! You can learn more on how to provide constant care by becoming a Monthly Magical Maker.